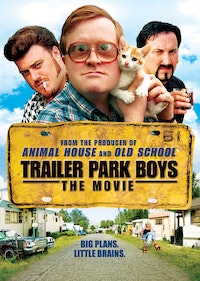 Back and wilder than ever, the sequel to the smash hit television and film comedy troupe, Trailer Park Boys, is finally here. When Ricky, Julian and Bubbles are finally released from jail, they return home to find their trailer park deserted. In an effort to save their home, they jump right back into a life of crime, and in a drunken haze wreak mayhem and hilarity wherever they go. This movie will leave you ripped, roaring and thirsting for more foul-mouthed comedy gold.