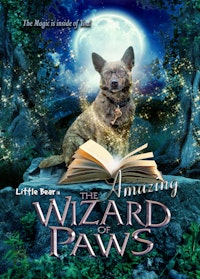 What happens when you find out the family dog is actually six-hundred years old and was once owned by a great and powerful wizard? In this charming and magical adventure, young Bobby Spade and his faithful Dog, Ozzy, stumble upon an ancient wizard’s mystical book of spells. The once shy boy and lovable canine are unprepared for what comes next as the two find themselves suddenly graced with extraordinary magical powers. Through this amazing miracle, Bobby is now inspired to become the world’s most famous magician, accompanied by he enchanted talking dog Ozzy who inherits universal wisdom and is eager to share it. With their newly acquired supernatural talents, these great and powerful little magicians embark on a series of wondrous spellbinding adventures. With some amazing and breathtaking illusions, the two amaze and astound everyone they encounter. Bobby’s magnificent skills also come in handy at school, and help him and Ozzy to escape the local bullies by showing them a supernatural thing or two they’ll never forget! To save the family home from foreclosure, Bobby and Ozzy enter the National Million Dollar Talent Show in hopes of winning the grand prize. It seems a cinch to nab the Million Dollars with their inherited new powers –until the evil Wizard, Lord Gragheon who fought for, and lost the book of spells centuries ago — time travels to claim it back through a spectacular dual against the young magician and his mystical talking dog.