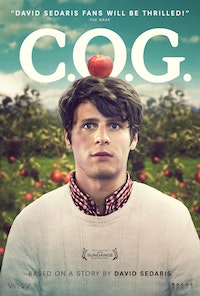 Based on David Sedaris' autobiographical short story, C.O.G. (which stands for Child of God) follows Samuel (Jonathan Groff), who attempts to immerse himself in "the real world," and go "off the grid" following his graduation from Yale to work at an apple farm under an alias. Out of his element and failing to fit in amongst the town's migrant workers and deeply religious locals, Samuel begins a journey that will take him deep into unfamiliar, awkward, and sometimes humorous territory as he encounters would-be benefactors and friends alike.