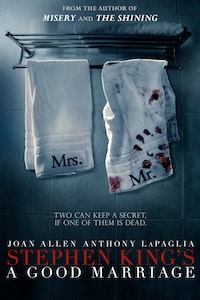 From the legendary Stephen King - As a sadistic serial killer is spreading fear across the Northeast, taunting the police as his victims pile up, Darcy Anderson (Joan Allen) and her husband Bob (Anthony LaPaglia) are celebrating another year of a good marriage. But when Darcy unveils a sinister secret about her husband, it threatens their perfect marriage - and lives.