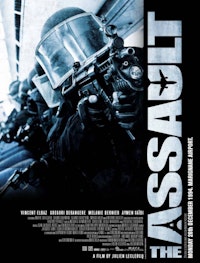 On December 24, 1994, when four heavily armed terrorists from the Algerian Armed Islamic Group hijacked an Air France plane bound for Paris at Algiers' airport, the 227 passengers on board seemed destined for tragedy. After hours of tireless negotiations the plane was granted permission to leave only to head to Marseille for refueling. Mindfully avoiding politics and emphasizing only the events themselves, The Assault weaves together the violent and claustrophobic onboard drama, with backstories of the tough SWAT officer and father Thierry (Vincent Elbaz), the determined jihadist from the slums of Algiers (Aymen Saidi), and an overly ambitious French Interior Ministry worker.