Bring Me the Head of the Machine Gun Woman
Press Area

Bring Me the Head of the Machine Gun Woman 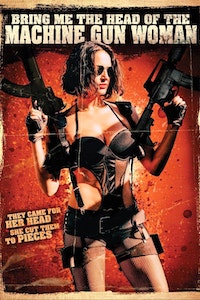 Santiago Fernandez is an aimless young man content with spending hours on the couch playing Grand Theft Auto and fantasizing about an exciting life of crime and gun fights. By night he DJs at a club owned by ruthless Argentinian kingpin Che Longana. One evening, Santiago finds himself trapped in a bathroom stall as Longana holds a secret meeting to make known his offer of $300 million pesos for the head of Machine Gun Woman, an ex-girlfriend turned hitwoman who has it out for him. When he is discovered eavesdropping on the conversation, Santiago's only choice to avoid being executed is to lie, claim he knows Machine Gun Woman and offer to bring her in. When he is given 24 hours to make good on his claim, Santiago's life turns into a violent video game of its own complete with missions, guns, sexy women and brutal violence.