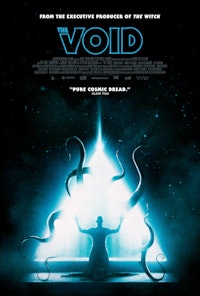 When police officer Carter discovers a blood-soaked man limping down a deserted road, he rushes him to a local hospital with a bare bones, night shift staff. As cloaked, cult-like figures surround the building, the patients and staff inside start to turn ravenously insane. Trying to protect the survivors, Carter leads them into the depths of the hospital where they discover a gateway to immense evil.