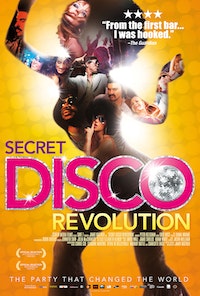 The Secret Disco Revolution - the period of dancing, sex, drugs, white polyester, platform shoes and disco balls. This era was nothing short of a revolution, liberating homosexuals, African-Americans and female sexuality. The Secret Disco Revolution features these theories with revealing new interviews with the era’s biggest stars, including: The Village People, Gloria Gaynor, KC and the Sunshine Band, Kool and the Gang; a goldmine of rarely seen stock footage; and enough disco hits to shake your booty straight back to 1978!